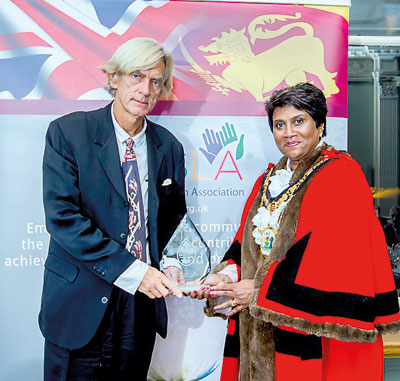 Michael Roc Thomas’s book of verses, ‘Seeing Better Now’, has been awarded the 2018 BRISLA Award for Outstanding Achievement in Literary Arts. This is the fourth year of the British Sri Lankan Association awards, and the ceremony was held last Saturday at the historic Long Room at Lord’s Cricket Ground, an apt location that celebrates the common passion that binds the two islands. The award was presented by the Mayor of Harrow Kareema Marikar.

Michael’s delightful compendium of verses was launched early at this year’s Fairway Galle Literary Festival. Illustrated beautifully by Sally Hulugalle and Ruwangi Amarasinghe, the magical verse stories explore so many humorous, quirky situations, many of them capturing the paradisiacal spirit of Sri Lanka, while there are tales from Australia, the UK, Switzerland and Vietnam. There are also stories of nature, of animals and conservation. With the tang of Edward Lear, Rudyard Kipling, or Lewis Carroll, the book brings a world of exotic joy to the reader.

Since January the book has garnered so much attention, and Michael has been doing a round of talks, the final two for this year being in London this November. The talks are titled “Seeing Better Now: Surviving and Thriving in Paradise.” Michael, who will be in Sri Lanka for a short spell, will have an exclusive book signing on Friday, October 26 at Barefoot.

BRISLA Award for ‘Outstanding Contribution to the Literary Arts in the Long Room at Lords CC.

Smiling faces, happy punters after my talk at Tate S. Lambeth Library on 07/11/18

Surviving and Thriving in Paradise. Click on the title below for details.